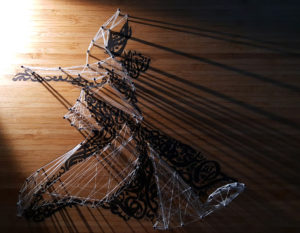 Traditional Middle Eastern dance from the Sofi and is considered to be a sort of praying or recollection to God. It is said that the turning they turn around themselves represents the rotation around the sun, and the wide white skirts turning broader is a representation of the magnificent universe, depicted in most social events nowadays as a form of reminiscing or old tradition. I’ve depicted this motion in the white lines, reflecting the haze that surrounds the dancer, integrated with the beautiful decorative Arabic calligraphy.

The shadow shows the fast movement of the dancer, the meaning of the shadow added reveals the acceleration in movement.

All art pieces are made from reclaimed wood signifying rebirth and the possibility for hope in the future. The wood used in this piece is British pine wood reclaimed from a kitchen in the UK.