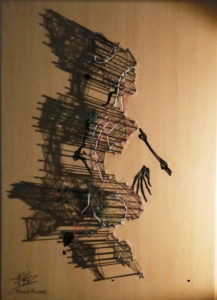 ‘The Remains of a Soul’ reflects the conditions of the Syrian people from the beginning of the war, up until this very moment. There is no doubt that this torn-apart country has affected its people, the people who were merely numbers in the eyes of the world. However, they are still human beings, suffering from corruption, death and dispute over their lands. The people turned into vessels that no longer hold any life within them, as they become collateral damage in the war.
Even their dead have become disembodied; fractions of human life. All that is left is a soul inside the remains of that body.

The shadow reveals a longing for completion, to resurrect the soul that was lost in the midst of the kidnapping, the unlawful arrests and raping. And then to connect that soul to any body parts that might still be functioning after all the bombing, explosion and flying shrapnel. As is characteristic of a shadow; this hope will remain pale and intangible.

All art pieces are made from reclaimed wood signifying rebirth and the possibility for hope in the future. The wood used in this piece was retrieved from the surviving parts of a kitchen from a shelled home in rural Damascus.