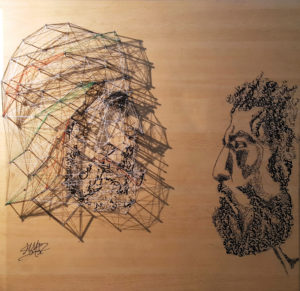 This piece is a demonstration of the people of Syria, fighting against each other, despite the fact that they are both the same. In terms of appearance they are identical sharing the same flesh and blood, they speak the same language and they share the same culture and traditions. It’s as if one man is looking through the mirror and not quite sure if he is looking at himself or his own individuality.

All art pieces are made from reclaimed wood signifying rebirth and the possibility for hope in the future. The wood used in this piece was retrieved from the surviving parts of a kitchen from a shelled home in rural Damascus.
When the light is added it shows the intensity of the confrontation and the fight that is rising up. The nails that were hammered down by the oppressing regime, and the strings that fabricated the fuel between the two brothers.

The words used to create these two men, are words and phrases that were not in the Syrian dictionary, but now they seem to be the only phrases used by the people.
The two faces were created of words from both sides of the conflict, the first face constituted from words of rebellion such as “We prefer death to humiliation”,
“The people want to take down the regime”, “Freedom is forever”.
The second face was created from the words of supporters of the regime, “We give you our blood and soul”. But in the end all that is left is the blood spilling from the fragile bodies of innocent people and their naive killers without distinguishing who is one what side.